This was the third Stakeholders’ meeting organized by HEPI-THET is a continuation of a series of activities that will eventually lead to completion and submission of these two curricula to be submitted to the Tanzania Commission for Universities for accreditation.

In the first meeting, stakeholders were introduced to the concept of harmonized curricula for the medicine and nursing programmes to be used in the country. In the second stakeholders meeting participants had the opportunity to contribute ideas on what competencies graduates of MD and BSc Nursing should possess. The competencies as raised by the stakeholders were grouped into nine domains.  These competency domains were to be translated into curricula.

In the opening speech, the Director of Higher Education, Ministry of Education Science and Technology, represented by Ms. Rozalia Kayombo commended the HEPI-THET consortium and said that these efforts are recognized by the government as an important step towards ensuring quality graduates across the country and ultimately improving the well-being of the Tanzanians through quality health care services.

The Director further said this exercise of harmonizing the MD and Nursing curricula is highly supported by the Ministry of Education Science and Technology, and the Government in general. “My Ministry appreciates the efforts that you are putting in to ensure that the doctors and nurses coming out of our institutions will have adequate competences to tackle health challenges that our people are facing” she added.

Speaking earlier on, the MUHAS Acting Vice Chancellor, Prof. David Urassa explained that recently MUHAS conducted a tracer study in which graduates from CUHAS, KCMUCo and MUHAS, employers, and professional councils had opportunity to share their views about the quality of teaching at our Universities. He said that Several issues were highlighted and major one being that the recent graduates have more theoretical knowledge and have deficits in skills.

Moreover, the Acting Vice Chancellor said that it is from the findings of the tracer study and inputs of the previous stakeholder’s meeting the team of faculty from CUHAS, KCMUCo and MUHAS has been developing the curricula. “Today we will hear from the working teams of the 3 collaborating Universities the progress made so far in this endeavor” he added.

In this Meeting participants from health professional associations, regulatory councils and health training institutions were able to listen and contributed to the work that has been done on the development of generic curricular for MD and BSc Nursing. The stakeholders were very satisfied with the stage the developed curricula have reached and promised to continuously support this undertaking.

This Stakeholders’ Meeting which was organized by the HEPI-THET project was held on the 4th March 2020 at MUHAS. HEPI-THET project is a consortium of the Muhimbili University of Health and Allied Sciences (MUHAS), Kilimanjaro Christian Medical University College (KCMUCo), and the Catholic University of Health and Allied Sciences (CUHAS) in collaboration with two United States partners, the University of California San Francisco (UCSF) and Duke University. The aim of THET is to produce health professionals through innovative educational strategies, who are competent and ready to practice inter-professionally wherever they are in Tanzania to take care of patients including those with HIV/AIDS. 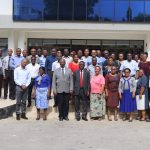 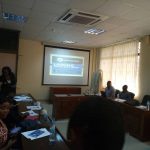 THET ENGAGES THE MEDIA ON HOW TO REPORT PROJECT ACTIVITIES ACCURATELY